Why is rhinoplasty needed ?

When we meet someone, first we notice the face. The first and most notable structure is the nose because of its central position. There is symmetry, angle and proportional harmony between the other structures and the nose, similar to the harmony between every anatomical structure in the face. If this harmony is disrupted for any reason, a disturbing aesthetic image will be manifested. This non-aesthetic image can disturb many people.

Nose deformities may be congenital or manifested later. Congenital disorders usually occur due to a cleft palate or cleft lip deformities. A nose that looks very nice and proportional in childhood can change its shape with adolescence and gain a non-aesthetic appearance. Nose deformities may develop as a result of a blow to the nose before or after puberty.

However, it is also a fact that there are albeit few patients who want to have a rhinoplasty who have a near-perfect nose structure. If the patient does not have respiratory problems, he / she should be steered to get psychological support, not cosmetic surgery. 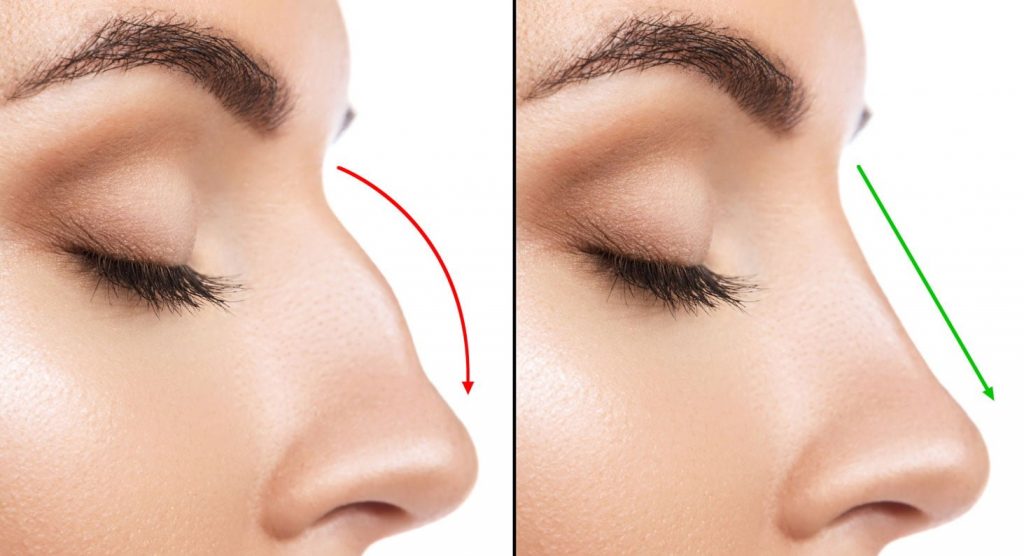 What is done in rhinoplasty

Deformities of the tip and bridge of the nose and nostrils are treated by intervention of cartilage, bone and subcutaneous soft tissues. Deviations, bone curvature, concha hypertrophy which make breathing difficult can be solved during cosmetic rhinoplasty.

Indication of a successful rhinoplasty

The most important issue in cosmetic rhinoplasty operations is that the surgeon establishes a  harmony of proportion of the nose itself as well as the angle of the nose with the other structures of the face.  Another issue that should be known is that rhinoplasty is carried out according to each individual facial structure. 15-20 years ago those who applied for rhinoplasty were subjected to the same bone and cartilage interventions regardless of their nose and facial structure. Usually the size of the nose would be reduced, the nasal tip lifted excessively and the nasal dorsum would be extremely curved and collapsed. As a result, people who had different facial structures and similar noses were manifested. The truth is that if the result of plastic surgery is not natural in appearance it will appear artificial to the eye. If an individual with a large and round face is given a small and pointed nose, it will look like somebody else’s nose has been glued on. However, nowadays, both in view of the generally accepted opinions in cosmetic surgery as well as the requests of patients who apply for surgery, the objective is to get results that are not exaggerated and are compliant with the individual’s features, that look natural and do not proclaim cosmetic surgery at first glance.

If a patient who has had rhinoplasty meets someone who they have not seen for some time and the person says, ‘there is a nice change in you but I cannot pinpoint exactly what it is’ is a sign of successful surgery.

The path to a successful result in rhinoplasty requires that the surgeon who will perform the operation listens to the patient and makes an assessment after a careful examination and manifests all the problems diligently. Once all the problems regarding the nose have been manifested what interventions will be done and to what degree the patient’s wishes can be countered shall be clearly asserted.  What the surgeon can do and the patient’s wishes are not always commensurate. Although every aesthetic surgeon does not express this clearly, sometimes because of some structural reasons it is not possible to provide the desired image for every nose. Such patients must be warned and the operation should only be carried out if the feasible changes will satisfy the patient. 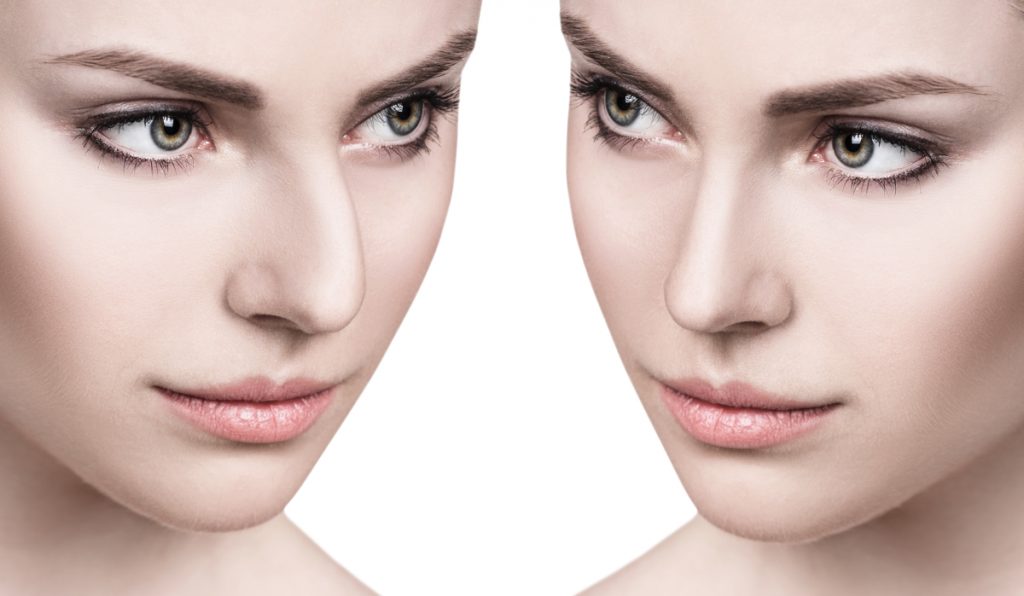 The right question and right decision for rhinoplasty

Some patients who apply for surgery ask me, ”do I need rhinoplasty? ” In my opinion this question is incorrect. There are a lot of people who do not see this as a problem, although they have less than perfect noses. In my opinion it is also wrong for a surgeon instead of the patient to decide whether rhinoplasty is necessary or not. All surgery puts patients at risk to a certain degree. Therefore it is up to the patient to weigh the risks and the positive changes for the patient and decide. It is more appropriate for the patient to ask the surgeon, ‘after examining my nose, do you think that I will benefit from cosmetic rhinoplasty?’. The appointment may end in line with the response of the surgeon or initiate a more detailed session.

Why the patient’s surgical history is important in rhinoplasty

A candidate for rhinoplasty must inform the surgeon whether he/she has undergone any nasal surgery at the beginning of the interview. Although not for aesthetic purposes, interventions such as previous septum deviation surgery of the nose can leave the surgeon in a difficult situation especially with any unexpected surprises in terms of cartilage and sometimes even bone structure. Such situations may not be understood during the examination unless the patient mentions them. Failure to reveal surgical history may leave the surgeon in a difficult position as well as leave the patient unhappy with the outcome. In such cases, the surgeon should reconsider aesthetic planning in terms of supplementation of the tissues which are determined to be incomplete; interventions such as intra-articular cartilage retrieval, cartilage retrieval from ribs which require the patient’s permission may be added to the necessary procedures.

Find out more about rhinoplasty

Patient’s age : Rhinoplasty is carried out on girls aged 16-17 years, and slightly later in males at 17-18 years of age. However, my personal preference is to perform surgery from the age of 18 years.

Surgery : Rhinoplasty takes between 2 and 3 hours depending on the nose structure, deviation or concha hypertrophy. During this period, planned corrections are made in the nasal cartilage and bone structure. Respiratory problems, if any, are eliminated. The most important factors affecting the result are the correct determination of the problems, good planning for correcting them and the ability to reflect the planning to the image. The surgeon should perform every cosmetic surgery he is planning on doing several times in his head as is the case for all surgeries.

Types of surgery : There are basically two types of rhinoplasty: Open and Closed Techniques. In the open technique, an incision is made between the tip of the nose and the lip, this incision continues along the nostrils. In the closed technique, the incisions remain completely inside the nose. Most of the corrections to be done on the nose can be done with the closed technique. It is a good option to use the open technique to see the structure of patients with severe nasal deformity, people with nose deformity accompanied by a cleft lip and palate or those who have had serious problems after rhinoplasty and correcting them. Although the nose structure of some people is similar from the outside, the condition of the cartilage and bones is not exactly the same. Therefore, it may sound like a cliché but the planning and implementing of every rhinoplasty is tailor made for the patient.

Risks : There is still a low risk of postoperative infection and bleeding as is the case in all aesthetic surgical operations. These possibilities are reduced with necessary measures but they can never be completely eliminated.

Revision Surgery : Although the aim is always to achieve the desired outcome in the first surgery, it may not be possible to accomplish this as planned, due to the 3-dimensional complexity of the nose, unexpected wound healing problems, nasal cartilage and unexpected deformation in the bones. In such cases, a revision (retouching) surgery may be required, which can be carried out with the application of local anesthesia with a sedation in 5-10% of the cases. These interventions usually do not exceed 30 minutes and cause no serious problems after surgery. With good planning and meticulous surgery, the chance of achieving successful results in the first operation increases and the need for retouching operations decreases.

Temporary Post operative complaints : Postoperatively, there is usually little or no pain. Especially under eye edema and bruising can be observed. These conditions will be minimized by the application of cold compresses for 2 days after surgery. There is usually no serious edema and bruising by the end of the first week. A general rule is not to stay under the sun when there is bruising. If you need to go out in the sun, use 20-30 factor sunscreen creams. If a tampon is inserted into the nose during the operation it shall be removed on the 3rd day. Meanwhile, headache, hiccups and coughing, albeit rare, may occur due to the fact that the nasal passages are closed. Early removal of the intranasal tampon may cause unexpected bleeding. It is recommended that patients who have a nasal tampon and have to breathe through their mouth for the first 3 days use a lip balm to prevent their lips from drying and chapping. Nowadays, there are many different dressing materials, and it is up to the surgeon to choose which one to use. The splint used after the nasal surgery is usually removed on the 7th day. If the splint is inserted into the nose after the operation when there is plenty of edema, the splint may become loose 3-4  days after the operation. In this case the splint needs to be refitted. The correct placement of the nasal splint in terms of giving the nose the new shape is closely associated with the success of the performed surgery. Materials such as plaster, aluminum, thermoplast can be used for the nose splint. It is up to the surgeon’s preference to choose which one to use. Sometimes there may be a serious feeling of itching underneath the nose splint. In such cases, the patient may want to relieve himself by scratching the skin of the nose with an object under the splint. However, this should be avoided because it may cause wounds or even infection in the nasal skin. After removing the nose splint, the nose is taped up to 10 days to protect the shape and reduce edema.

Return to daily life : A patient can easily return to daily life after 1-2 days after rhinoplasty. After removal of the nasal tampon, the patient can easily continue his life outside the home. He can return to work after 5-7 days. Patients being outdoors with splints or with taped noses were not observed when rhinoplasty was less common and known. When observed, such patients were considered accident victims. Today, however, information about cosmetic surgery has increased and the number of people who think such patients are victims of accidents is practically non-existent. Therefore, patients can easily go about their daily lives with splints or tapes in their noses. Edema in the nose, especially in women, decreases significantly during the third week and is reduced to a level that does not attract attention. The thicker and oilier the nasal skin is, the longer the edema will persist. Therefore, it is a known fact before the operation that edema will persist especially in male patients much longer and it should be explained to the patient to avoid surprises. Edema does not descend to every part of the nose at the same time. Recovery initially starts on the bridge of the nose and ends with the nose tip. In men, this edematous period can take 1,5-2 months. Nose appearance in women is close to completed in 2-3 months while this period is 4-5 months for men.

Things to pay attention to: After rhinoplasty, the patient has to protect himself / herself from even mild blows, especially within the first 3 months. Any impact to the nose can cause unwanted nasal changes. Patients should stop wearing glasses for approximately 3 months after surgery. 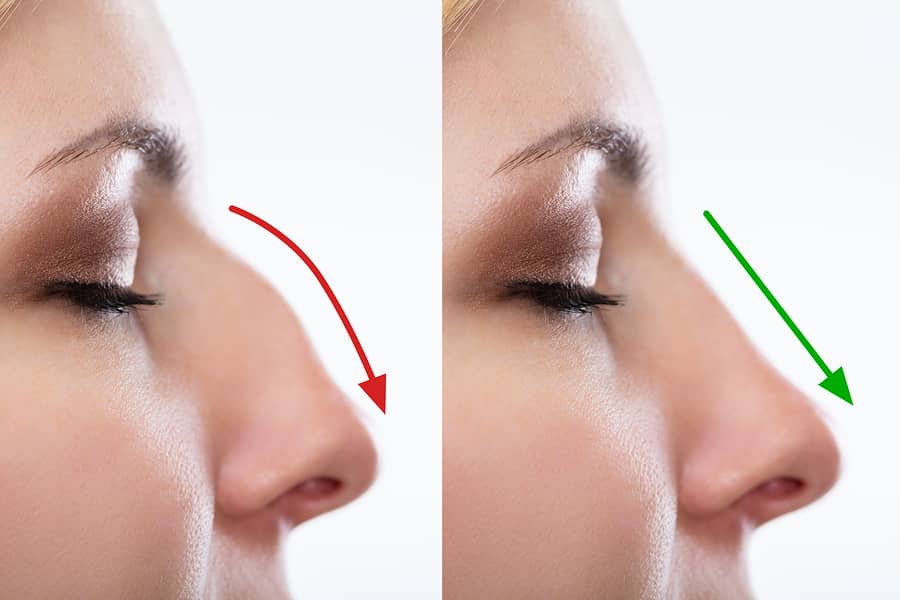 Let Us Call You!
Send Form